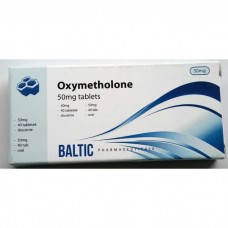 Oxymetholone (ANAPOLON) brings the bigest mass, and power. This is the hardest steroid.

CHARACTERISTICS
Oxymetholone has unusually strong androgenic effects. It can provide a huge increase in strength and mass in a very short time. Given that it has a considerable ability to retain water in the body, increases muscle mass are usually thick, with typical swollen appearance of muscle. It is used mainly in volume period, when it acts as a growth accelerator with a strong pump-effect and helps to maintain great level of strength on a high level for most of the workout. Moreover, it has strong regenerative effect. Many athletes also use it to protect joints at high load.

Oxymetholone is derived from dihydrotestosterone (DHT). That is, oxymetholone is basically a modified dihydrotestosterone. Other compounds belonging to the group of anabolic steroids are derived from DHT stanozolol, methenolone, drostanolone, oxandrolone as well as several others. Oxymetholone differs from DHT by the addition of a methyl group attached to the carbon at the 17 position, and the 2-hydroxymethyl group is attached to the first carbon on cycloalkane ring. These changes allow the oxymetholone to remain active in muscle tissue, where the dihydrotestosterone is normally disposed. The enzyme responsible for the degradation of dihydrotestosterone in muscle tissue is called 3-hydroxysteroid dehydrogenase. With the above chemical modifications, the enzyme does not react with oxymetholone. This allows the compound to stay active in the muscle tissue, and provide a very strong effect. Oxymetholone has anabolic strength in the value of 320 (more than 3 times the force of testosterone, which has an anabolic power of 100 value).It has also been found to have lower androgen strength (value of 45) compared to testosterone (value 100).

One of the unique and mysterious features of oxymetholone is that, while a derivative of dihydrotestosterone, it has a very high level of estrogenic activity. Dihydrotestosterone derivatives should not be able to convert to estrogen by the enzyme aromatase, and thus do not cause any estrogenic effects, but it's different with oxymetholone. Oxymetholone is also well known to cause excessive water retention, bloating, gynecomastia, and other estrogenic effects in the body, although it does not convert to estrogen.It is believed that in some tissues it acts like an estrogen. It is necessary to note that all potential users understand that although Oxymetholone is a derivative of dihydrotestosterone, they cannot expect a solid and quality gains that are typical of other DHT derivatives. Estrogenic effects of oxymetholone cannot be combated by means of aromatase inhibitors because of the fact that it is not capable of converting into estrogen.

Oxymetholone belongs to a group of anabolic-androgenic steroid with the most harmful effects.Many directly associate this substance with liver cancer. It can cause liver failure, which is initially manifested in elevated values, but later the prolonged use of this substance leads to liver damage. Among the estrogenic side effects is the emergence of gynekomatic. The high retention of salt and water increases the blood pressure. Oxymetholone has significantl impact on reducing the production of testosterone. It increases the number of red blood cells. Part of the active substance is converted to dihydrotestosterone (DHT); therefore some individuals may experience severe acne and hair loss. Other side effects may be headache, nausea, stomach pain, vomiting, insomnia and diarrhoea. While taking oxymetholone often paradoxical situation arises when a bodybuilder is gaining weight and strength, but does not feel particularly well. It strongly affects the conversion of carbohydrates into glycogen. In case of insufficient intake of carbohydrates it may induce a state of hypoglycemia. Greater level of aggression is attributed to increased levels of androgens and still rises at simultaneous application of large doses of testosterone. It leads to changes in the values ​​of HDL (good) and LDL (bad) cholesterol. Gains from the substance tend to disappear fairly quickly after discontinuation.

The first studies on oxymetholone liver toxicity in AIDS patients, have shown a harmful effect in the dose of 40 and 80 mg but not in a dose of 20 mg daily.(Detection of liver toxicity of steroids, however, is now generally problematic because it is deduced based on responses of steroid with certain enzymes and their subsequent concentration.) W. Llewellyn cites in his book Anabolics 2006 another interesting study that describes the side effects of oxymetholone on a group of older men (65-80 years), who received 50 or 100 mg of oxymetholone per day for 12 weeks. It was shown that in both groups oxymetholone significantly reduced HDL cholesterol levels, but the burden on the liver (the measurement of the activity of liver enzymes AST and ALT) surprisingly occurred only in the group receiving 100 mg / day, and even in this case it was not dramatic.

DOSAGE
It is one of the few anabolic-androgenic steroids, which abused dose is significantly lower than the so-called therapeutic dose, commonly used in the treatment process. The package leaflet usually indicates a therapeutic dosage of 1-5 mg per kg body weight. Available information suggests that athletes due to the high toxicity of the substance opt for the optimal dose to be 50-100 mg per day. Its half-life (biological half-life) is 8-9 hours. Obviously, only short-term abuse of this substance should be considered (maximum 3-5 weeks) because the receptors that react to this substances do so only for a short period. However, as oxymetholone causes a significant reduction in the level of natural androgens, after discontinuation the vast majority of gains are lost. Quality PCT is therefore a necessity.

Athletes take oxymetholone primarily as a "starter" substance at the beginning of the injection cycle, the effect of which is slow (e.g. with testosterone, nandrolone, methenolonom, boldenone).Separate use of oxymetholone does not make sense, because the results are hardly sustainable. Studies show that the substance stays in the urine for 50-60 days.